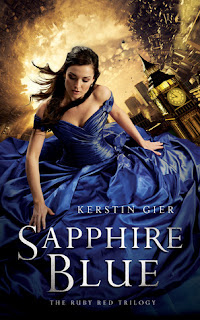 Alright, so I'm continuing to power through the Ruby Red Trilogy.  Book two, Sapphire Blue, picks up right after Ruby Red ends. Gwen and Gideon had escaped from Paul and Lucy and were hiding out in a church when he kissed her.  They travel back to the present, and Gwen sees a gargoyle demon who takes an interest in her because she can see and hear him.  He pesters her and follows her back to the temple, and she finally accepts his presence if he'll agree to some ground rules.  So she ends up with a fun friend who can spy on people for her and help her find information, and he gets to talk to someone other than a ghost.

Gwen keeps getting sent back to elapse in a cellar (it's supposed to be a safe place where she gets to do her homework).  On her first trip back there, she meets her grandfather.  They devise a way to get in contact again in the future (and he agrees to look into something Lucy told her at the end of the last book).  On her next trip back, Gideon accompanies her (so she can't go looking for her grandfather); they end up making out.  Then Gideon becomes very cold and distant to her, which confuses, and ultimately angers Gwen (a lot of this book is waffling back and forth on their relationship because they don't really talk); Gideon later admits that on his last mission he saw a future version of her who may have led him into a trap.  Oh, and he's angry that she may be hiding something from him because he smells cigarette smoke on her when she comes back from elapsing (she met her grandfather).  They kind of forgive each other, then head to the 18th century to attend a soiree with the Count Saint-Germain.  Gwen is terrified of the count because of her first encounter with him (from Ruby Red), but he seems pleasant since they had a chat yesterday (it was a future meeting for Gwen, but in the past for the Count).  The soiree goes well enough (considering Gwen gets drunk and sings a future song for everyone, then later talks to a ghost because she's too drunk to realize he's a ghost), then she meets with the Count the next day.  He tells her women are dumb and easily pliable if they are in love, and that Gideon was instructed to make her love him.  She confronts Gideon about it and makes him admit that this is true.  Gideon tries to explain, but she leaves.  The book ends on a fight Paul got into in the past where he almost died, but got rescued by Gideon.  Paul implores Gideon to read some notes he has on the rest of the prophecy (and to ultimately save Gwen).

Like Ruby Red, Sapphire Blue is a very easy read.  But I did get annoyed at parts of it.  Like how Gwen finally realizes that the fact she can talk to ghosts is the Raven magic she's supposed to have (even though multiple people have told her the rhyme).  And as I mentioned, there's a lot of waffling about Gideon (which I get, that sort of thing totally happens in real life.  I just found myself getting annoyed about it because it kept going on. Plus it's not the most fascinating reading).  The Circle people keep excluding Gwen from things, driving her to discover more and more with her demon friend and best human friend Lesley.  The Circle seems to be misogynistic rather like the Count totally is, which was rather a shame.

Despite those flaws (which are largely plot-related), I still think the characters are fun (specifically a lot of the side characters).  I especially loved Xemerius, the demon gargoyle.  And Madam Rossini of course (she was fantastic in Ruby Red as well; I wish she was in the books a bit more).  I would have liked to see a bit more of James, the ghost at Gwen's school, but he took a backseat in this book (and was largely unnecessary because Xemerius was there).

So two down and one more to go in this trilogy!
Posted by Shauna at 1:20 AM