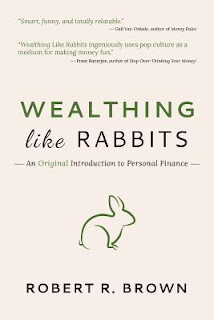 I've been waiting to read Robert R. Brown's Wealthing Like Rabbits since the middle of June. I put the book on hold at the library, expecting to see it around June 21st when it was due.  It's now almost August and the book STILL hasn't been returned.  So I broke down and bought it on my Kindle instead.  I read most of the book yesterday, and finished it off this evening.

Wealthing Like Rabbits is another Canadian personal finance book.  Much like the other ones I've read, it's aimed mainly at people who are new to building their wealth.  I think it's probably one of the easiest books on the subject to read that I've read to date.  Brown has aimed it at young adults (specifically adults thirty and younger); he says this at the end of the book, but it's kind of obvious from his use of things like zombies and Star Trek to illustrate his points.

Wealthing Like Rabbits has a lot of the same advice that the other books have, which can be boiled down to "get out of debt and save money."  While his message is the same as the other books, he makes some very interesting suggestions.  For one, he recommends that you start an RRSP as opposed to a TFSA (although a TFSA is okay too) because when you are younger you should be more in need of the tax break than when you are older.  A younger person is starting their life out, so they may be dealing with buying a home, getting married, and starting a family.  When you're older, and if you've been saving all your life, you should be able to afford the tax (especially if you're wealthy enough to be in a higher tax bracket).  He recommends that you save 18% of your income in your RRSP (I think that's the maximum you can put into your RRSP), and if you're having trouble doing so, you can fill out a form to have your employer take a corresponding amount of income tax off of your paycheck.  Brown believes getting a tax return is not a good thing, because you are in effect lending the government your money and getting no interest for your troubles.  A friend of mine at work mentioned this idea to me a few months back; I later found out she read Wealthing Like Rabbits, so I'm sure she got the idea from here.  Oh, and Brown says trips are okay to spend your money on (assuming you have saved up for your trip first! You should never go into debt for a trip); I've heard that some financial planning books and advice say trips are not a good investment because unlike buying a camp, the money is gone.  In Brown's view, the trip itself gives you memories that are well worth the money.  So that was a nice sentiment to read.  He feels much the same about weddings - the memories are important, but you don't have to break the bank having one because people don't remember the cost and stuff, they remember the other people who were there.

There was one chapter at the end that was a bit weird to read.  It was full of random musings and advice.  Yes there were some really good tidbits in it, but there were also a couple of really random thoughts that I'm not quite sure what they were doing in the book (or maybe I just didn't get the references?)

Overall, Wealthing Like Rabbits is a very good read.  It's fast and very easy to understand.  But some people may not like (or get) his references to things like zombies and Star Trek, so they may be better off reading something else like Preet Banerjee's Stop Over-Thinking Your Money! The Five Simple Rules of Financial Success or Shannon Lee Simmons' Worry-Free Money: the Guilt-Free Approach to Managing Your Money and Your Life instead.