Jane Foster Valkyrie: The Sacred and the Profane 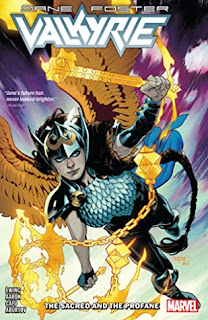 The same friend who lent me Invisible Woman: Partners in Crime also lent me Jane Foster Valkyrie: The Sacred and the Profane.  I was quite excited to read this one because I'm a huge fan of the Jane Foster as Thor, Goddess of Thunder run that Marvel ran a few years ago.

After the War of the Realms leaves all of the Valkyrie dead, Jane Foster agrees to take on their mantle and become the last living Valkyrie.  But she is cautioned: being Valkyrie is not the same as being a hero, it's a job.

Aided by Undrjarn the All-Weapon (the remains of the War Thor's hammer), Jane Foster needs to learn just what it is to be Valkyrie.

I liked this story.  Jane is once again trying to balance her heroic duties with her mortal life.  She doesn't want to give up the normalcy of her mortality, so she hasn't told anyone that she is Valkyrie.  But that also comes with a price; she's late to her performance review at the hospital, and, as a result, demoted to morgue assistant.  Her new position is accompanied with less pay, so now she's avoiding her landlord, too.

She also keeps thinking like a superhero, thanks to having wielded both Thor's hammer and later the War Thor's hammer in the War of the Realms (which I unfortunately haven't read).  But being a Valkyrie is different.  Heimdall is the first to help her, telling her she has the eyes of the Valkyrie (which also shows her how close everyone's death is).  She also needs to learn how to trust the part of her that is Valkyrie (but she shies away from it because she's afraid it is changing her).

I loved Mister Horse.  Mister Horse was Brynhilde's winged horse, who was under control of Bullseye (he obtained Brynhilde's sword).  Once the sword was shattered by Jane (another fun moment - the sword was powerful, but only because Jane was seeing it as important - letting it and Brynhilde go allowed her to defeat it), Mister Horse just sort of stuck around with her, helping her ferry Heimdall to his chosen afterlife.

My one complaint was this story got a little monotonous.  Issue two had Jane learning to be a Valkyrie, then that was kind of repeated (though, to be fair, a bit different) in issue 5.  That being said though, I thought this story sets up beautifully for the next arc, which I can't wait to read! :)
Posted by Shauna at 10:47 PM