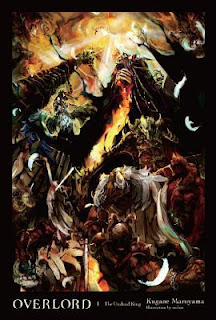 After finishing Iraq Under Siege, I wanted to read some fiction.  So I chose to read Overlord: The Undead King by Kugane Maruyama, a Japanese Light Novel (translated) that a friend lent me sometime ago.

In Overlord, Momonga is one of the last players of a virtual world that is being shut down.  He stays in the game until the last minute, wanting to enjoy all that his guild had built during the game's heyday.  But when the servers shut down, Momonga finds himself still his character in what looks like the game world.  The NPCs who were always silent are now talking and have the backstories and personalities the guild members wrote for them (including the last minute change Momonga made for Albedo, which he feels incredibly guilty of).  Now Momonga needs to figure out where they are and whether or not he can trust all of the NPCs; he must now be the Overlord in truth!

I found Overlord a bit slow going in the beginning, even though it was necessary to set up the game world of Yggdrasil before everything became real.  But once the servers went down and the NPCs came alive, the book became super fun! I loved Momonga's attempts to appear outwardly calm and collected for everyone while internally he was freaking out.  I also loved that Maruyama included an intermission part way through the story that showed what the main NPCs were thinking of Momonga.  The end fight was also incredibly fun, where Momonga is trying to be super cautious but discovers that whatever world this is, he's so much more powerful than everyone.  It's a very fun story, and I'd love to read more!
Posted by Shauna at 12:15 AM