Iraq Under Siege: the Deadly Impact of Sanctions and War 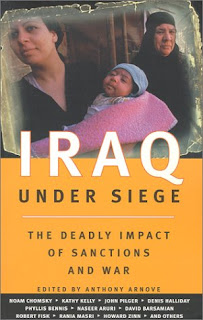 Continuing with my reading of books people have lent me, this time I chose Iraq Under Siege: The Deadly Impact of Sanctions and War, edited by Anthony Arnove. My brother lent this to me quite some time ago, and I admit I had a hard time psyching myself up to read it because I knew it would be pretty heavy.

Iraq Under Siege is a collection of essays from people protesting the lengthy sanctions that were imposed on Iraq by the UN Security Council after the invasion of Kuwait in 1990.  Initially the sanctions were going to be lifted after Iraqi forces withdrew from the area, but the sanctions ended up in place until after the Invasion of Iraq in 2003.  Many of the authors visited Iraq during that time (this is the first edition of the book, so prior to 2000 when it was published) and saw firsthand the devastation the sanctions and wars had wrought on the civilian population and infrastructure of Iraq.

While a very interesting and alarming read, I did find the book to be a bit repetitive by the end.  The same statistics and sources were used by many of the authors.
Posted by Shauna at 10:09 PM