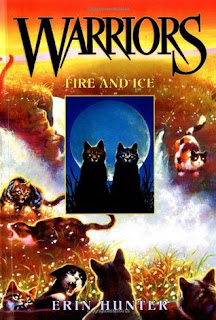 I finished Warriors Books 2: Fire and Ice the other day.  Overall I found the book okay - I didn't like it as much as the first one though.

Fire and Ice picks up right after Into the Wild. Fireheart and Graystripe are warriors now, and just finished their vigils.  They are then sent on their first warrior mission: to bring WindClan back after they were driven off by ShadowClan.

This....happened a lot easier and quicker than I thought it would.  They picked up the trail fairly quickly, and basically brought everyone back without incident.  But on their way back to ThunderClan, they returned through RiverClan territory because it was a shorter route, and managed to get into a fight.  A ThunderClan patrol headed by Tigerclaw came to their rescue, but in the scuffle, a RiverClan warrior fell into the river and drowned.  Everyone said there would be consequences from that, but the consequences never really materialized during the book, so I'm not really sure what will happen with that.

In the wake of those events, Bluestar declares they need to train more warriors, so both Fireheart and Graystripe are given new apprentices.  While training their new apprentices, Graystripe encounters a she-cat from RiverClan whom he falls in love with.  And with Graystripe being distracted and unavailable for Fireheart (and even for Graystripe's own apprentice), Fireheart finds himself spending more and more time back at the Two-Leg place with his sister (who brings her firstborn son to Fireheart to train as a Warrior, too).

Fire and Ice deals primarily with issues of fitting in, and loyalty.  As a former kittypet, Fireheart feels he doesn't fit in with the others (some of which still bring up his kittypet roots), and doesn't have a shared history and culture with them.  This is made even worse when he and Graystripe start scrapping because Fireheart is worried about (and uncomfortable covering for) him during his affair with the RiverClan cat.

While these are interesting topics (and important for kids to think about - these are children's books, afterall), I felt that the execution wasn't very good.  The book felt like it was written mainly in a telling fashion, and so I had a really hard time picturing anything.  It also kind of moved abruptly - something would happen, and suddenly it was months later.

So this definitely wasn't my favourite book.  But I am hopeful that the next book, Forest of Secrets, will be better!