Warriors: Into the Wild 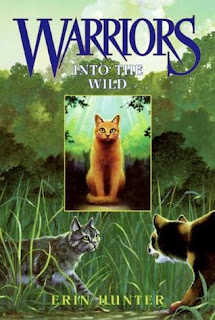 A while ago, a friend of mine got me the first five Warriors books by Erin Hunter. After finishing The Unfamiliar Garden, I wanted to read something totally different from what I've been reading lately, and thought this would be a good time to give them a try!
Into the Wild is about Rusty, a pet cat who dreams of a wild life. A chance encounter with some of the wild cats of ThunderClan from the nearby woods gives him the choice of joining them, or remaining a house cat with an easy life (though, the wild cats assure him that life too has some sacrifices in that he will not remain an intact Tom cat). Opting to fulfill his dreams, he joins ThunderClan, embracing their training to become one of their Warriors.
One of my biggest complaints about the story, particularly in the beginning, was that it was hard to keep all the characters straight (I realized near the end of the book that there was actually a character list in the beginning pages, but I missed it when I first started reading - that would have been very helpful to realize it was there sooner!!!) Once I got to know the characters, that got a bit easier, and I found myself enjoying the story a bit more. But I still found myself tripped up from time to time, particularly when cats from other clans were involved.
I also had no idea how dark this book would be. It's a story for I think tweens (it felt a little on the easy side for a young adult book), and it has a lot of characters die in it, mostly from battles between the clans.
While most of the characters were a bit two-dimensional, I still liked them a lot, especially the friendship between the three apprentices Firepaw (Rusty renamed once he joined ThunderClan), Graypaw, and Ravenpaw. I also really liked Yellowfang - she was a lot more nuanced than most of the other older cats. But I will admit that at times it was hard to remember that they were all cats - some of the words and actions that Hunter used kept making me picture them all as humans.
Overall though, Into the Wild was a solid introduction to the world of Warriors. I'm looking forward to reading book 2.
Posted by Shauna at 1:37 AM