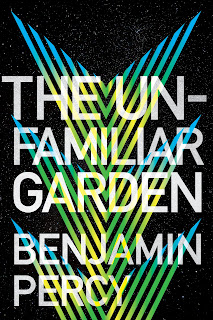 Continuing with Benjamin Percy's Comet Cycle at the recommendation of a friend, I read book 2, The Unfamiliar Garden.  This is the book that my friend said was even better than the first one, and I wholeheartedly agree!

The Unfamiliar Garden takes place in Seattle/Washington State.  The night of the meteor shower five years ago, Jack Abernathy, a professor who specializes in fungus, went out into the woods to do some research.  He brought his eight-year-old daughter, Mia, with him so he could keep an eye on her (and so his police detective wife, Nora, can get some sleep).  But while his back was turned, Mia disappeared.

Five years later, Jack is a mess.  He no longer cares about his job or his work, and Nora divorced him.  For her part, Nora has thrown herself into her work as a homicide detective, bringing down murderers thanks to her ability to see the bigger picture.  But the rains have returned to Seattle, leading to a flowering of fungi.  And after one of his grad students gets sick after bringing in samples, Jack discovers a new parasitic fungus that seems to be infecting all animal life, including humans.  And Nora starts seeing a rash of copycat ritualistic murders with no rhyme or reason, which ends up leading her to team up with her ex-husband to stop them.

I really liked The Unfamiliar Garden.  The narrative was a lot tighter than The Ninth Metal because it was only following a few characters, most of who were more interconnected right from the beginning than the ones in The Ninth Metal.

I also really liked the plot and pacing of The Unfamiliar Garden.  While I kind of knew from the beginning what was going on, it didn't matter.  I'm also not a huge horror fan, but the horror elements in the book really worked.  The plot also moves along at a really nice clip, which made me not want to put the book down (once I was near the end, I stayed up to finish it rather than wait for the next day!)

Very much recommended.  I hope the third book in The Comet Cycle is as good as The Unfamiliar Garden!