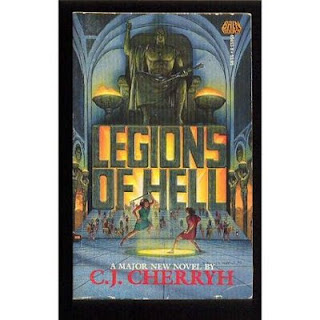 Well, this is another book that I decided I could not go to sleep before I had finished it. So once again it was 5am when I went to sleep.
C. J. Cherryh's Legions of Hell was a very interesting read. It's not every day that you come across a novel with Julius Cesar, Cleopatra, Napoleon Bonaparte and a whole host of others running about in a shared Hell. The book was a bit slow to start off, but after I made it about a third of the way through, I found that I didn't want to put it down! Legions of Hell is mainly the story of Brutus, the man who helped assassinate Cesar - but who did not remember anything beyond his 17th year. In Hell, Brutus and Cesar are both given a rare chance to change the history between them for the better.
I am going to complain about the ending though. It didn't really wrap the story up. I'm sure that was because Baen Books or C. J. Cherryh want the reader to keep reading the series. But I was really looking forward to seeing how some things would be resolved; I was very disappointed that that resolution never came.
Posted by Shauna at 3:25 PM