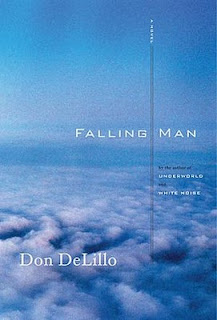 Don DeLillo's Falling Man is like nothing I've ever read before. I really enjoyed reading it, but I couldn't tell you why. It was an odd book in many ways. The descriptions were fantastic, but everything else was just really strange. It was often hard to tell what character was being talked about, or even talking; they were rarely mentioned by name. Even other characters wouldn't call each other by name (for example, the main characters, Keith and Lianne, called their son "the kid," which was odd, but at least you consistently knew who they were talking about). On top of that, the dialogue was extremely artificial, and very hard to follow.
The actual story is also a bit strange. Falling Man is the story of Keith, who survived the attack on the towers. After getting out just before they collapsed, he decided to head home to his estranged wife. Falling Man is the story of his family coming back together and then slowly coming apart again as time and distance from the towers increases.
Falling Man is not something I would normally read. It's also something I wouldn't normally like. With weird and generally crappy dialogue, I'm surprised I made it through it so quickly. But I honestly did enjoy reading it.
Posted by Shauna at 2:57 AM