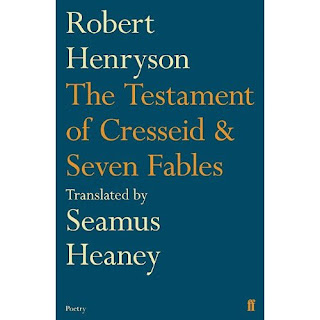 Today I read Robert Henryson's The Testament of Cresseid & Seven Fables, translated by Seamus Heaney. It was a really easy and quick read. I was really interested in the first part of the book, which was The Testament of Cresseid. Having studied Shakespeare's Troilus and Cressida last year, I was interested in a different take on the material. And this was an extremely different take!
After abandoning Troilus, Cresseid was herself abandoned by Diomedes. She returns to her father's house and curses both Venus and Cupid for her plight. Cupid takes exception to this and asks the other gods to intervene on their behalf. And so the other gods curse Cresseid to become a leper. Cresseid passes the rest of her days in a leper house, but encounters Troilus one day (although neither recognizes the other). It is an extremely sad tale, especially at the end when they realize who each other was.
Included in this book are also seven Fables. The Fables were pretty entertaining to read. All in all, this was a quick but enjoyable read.
Posted by Shauna at 11:21 PM