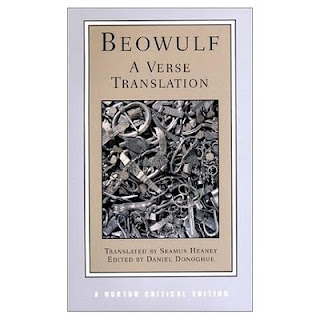 This was, I think, my third time reading Beowulf. The first two times I read it were both the year before I started this blog (when I was finishing up my first degree). I remember talking to a friend who said he absolutely hated reading it. But I really enjoyed it. Right off the bat I realized it was a viking story, which was a lot of fun. I watched Beowulf and Grendel that year, before rereading it a second time in preparation for the exam. And now I got to read it a third time for my "Translating the Middle Ages" class. I even lucked out: we're reading the Seamus Heany version, which is the version I have.
Going back to Beowulf was like going back to an old friend. Sure, I didn't remember the specifics, but I still remembered the just of the story. I also still remembered the ways in which the CGI Beowulf differs from the poem. (In case you're wondering, read the poem; it's better!)
Beowulf tells the hero's story, from his coming to help the Danes defeat Grendel to his downfall fifty years later saving his people from a dragon. It has a lot of battle and adventure in it. But more than that, it also gives you a glimpse of what life was like during the end of the 1st millenia AD. Now I know there weren't dragons and Grendels running around, but you can at least see some of what life was like in the halls of the vikings.
I don't want to say much more about it, other than to restate how much I like it. Sure, it isn't for everyone. But give it a try - you just might be entertained!
Posted by Shauna at 12:51 AM