School Book: In the Shadow of No Towers 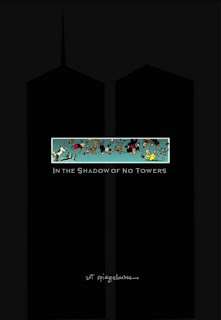 I was pretty busy today so I decided to read Art Spiegelman's In the Shadow of No Towers. It's a board book/graphic novel, so I knew I could finish it in one night.
In the Shadow of No Towers was a pretty cool read. The first half of the book is made up of the actual comic strip. It deals with the author/illustrator's feelings in the wake of September 11th. The first few panels seemed a bit confusing, but once I got past that I enjoyed reading them.
The second half of the book was really cool though. It has several comic strips from New York at the beginning of the 20th Century reproduced. It was really interesting to learn about them. But more than that, Spiegelman based some of his panels from his strip from these; so while I was reading them, I was repeatedly struck with "aha" moments, realizing where he got the inspiration for some things from.
In the Shadow of No Towers is a quick read that I really enjoyed. Being so far removed from the actual events, it was informative to see how someone who witnessed the towers tumbling felt both during and after 9/11. I can't wait to talk about it in class this term!
Posted by Shauna at 12:42 AM