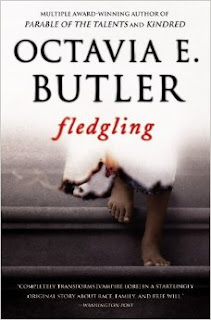 Last year, when I went to 4th Street Fantasy, Octavia E. Butler's name came up a few times.  So I made a point of reading something by Butler before going back to 4th Street.  I didn't know anything about Butler, but I found Fledgling in Grand Marais a while ago and decided that was the book I was going to read (that was the same time I bought Sunshine; I'm not sure why, but that seemed to be a vampire book sort of day).

Fledgling is about a vampire (or Ina, as they call themselves) girl named Shori.  Shori awakens in a cave, badly injured and with no memory of what happened to her.  It turns out that she is the only survivor of her Mothers' colony.  Even though she looks to be about 10, she's in fact fifty-three years old.

Fledgling is the story of Shori's attempt to both remember what happened to her and her family, and to survive.  Her mothers were experimenting with genetics, trying to find a way to combine Ina and Human genes so that the Ina would be able to survive in the sun: Shori was the successful culmination of their experiments.  Her dark skin protects her so she doesn't burn in sunlight quite as easily (although she does still burn); she's also able to stay awake during the day, where other Ina are not.

While her memory of her family and who she is is gone, she is still able to remember things innately.  And that's how she's able to bond with Wright, the human who finds her on the side of the road.  The Ina and humans have a symbiotic relationship with one another: the Ina feed off of human blood, while the humans get intense pleasure from them (and a healthy, long life).  I honestly thought this was a really neat way to look at vampires.

While this started out a book largely focussed on memory loss (and what it means to be a family), it ends up being a story about racism.  What happened to Shori was no accident: someone wants her dead because of her hybrid genetics.  And no innocent people, Ina or human, are going to get in their way to seeing her dead.

Once it is discovered who has targeted Shori, the book then becomes a bit more political.  The Ina call together a Council of Judgment, where both parties (Shori and the accused family) are to present their cases to members of Ina families who are related to both parties.  The Council members are all elders because they are most experienced and so most capable of using their senses to spot falsehood and truth.  Over three nights, both parties are to say what they want, question whomever they want, and then are to accept the judgment the Council decides on.  It was here where the racism became overt.

The one thing that was really uncomfortable about Fledgling was the beginning.  I had read the back of the book, so I knew Shori was fifty-three years old.  But at the beginning, she still seems very childlike.  And there's a sex scene which is extremely uncomfortable to read through.  It thankfully doesn't go into graphic detail.  But the whole scenario seems just so wrong (albeit deliberately so).  Once we're past that (and the book makes clear that even though Shori looks young, she is in fact an adult according to human standards), I think the book makes it clear that Shori is rather adult-like, and so as the reader, you're able to get past what had just happened.  As one reviewer on Goodreads said, "vampires and their humans, though, have a unique relationship," which I think is how you are able to get past this aspect of the book.

All in all, Fledgling was a very interesting take on the vampire myth.  While uncomfortable at times (for many reasons), it really makes you think.  I'm definitely going to read more of Butler's work in the future!
Posted by Shauna at 11:27 PM