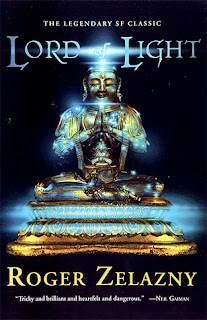 My brother lent my Roger Zelazny's Lord of Light a few weeks ago. When we went to 4th Street Fantasy last year, Zelazny came up in conversation quite a bit.  Both of us have read one of his other books, A Farce to Be Reckoned With (and I read If At Faust You Don't Succeed), although my brother didn't realize it was by Zelazny.  So he got Lord of Light in an effort to read something by Zelazny before this year's 4th Street.  And I decided to read it as well; keep in mind this was before I updated the list and realized I had way more books than I thought I did.

I'm not entirely sure what I want to say about Lord of Light, now that I'm finished reading it.  I liked that it uses the pantheon from Hinduism (even if it doesn't use them well) because I have not encountered many science fiction and fantasy books that look outside of the Western world.  But I had a bit of a hard time reading it (in part because life seemed against me reading it at times over the last week).  I had intended to actually finish it a week ago, but as you can see, that didn't happen, having finally finished it today.

Lord of Light is the story of Mahasamatman, or Sam as he prefers to be called.  Sam is an Accelerationist - meaning he doesn't believe the beings on his world who have made themselves gods should keep the rest of humanity in a dark age.  And so he rises up against them, first through Buddhist teachings, and later through actual battles.

The first half of the book is a bit hard to follow.  Sam is referred to by many names, including Siddhartha and Tathagatha.  Often a new chapter will use a different name to refer to Sam, and it took me a bit in some cases (particularly Tathagatha) to realize we were still talking about Sam.  The first chapter talks about Yama bringing Sam back to the world of the living from Nirvana, which left me wondering for awhile if Lord of Light were in fact book 2 of a series.  But about halfway through the book, I realized that subsequent chapters (up to about chapter 5) were actually the back story, telling us how Sam came to be in Nirvana in the first place.

Zelazny's writing was great.  He had some excellent phrases, including a quote I'm going to use for Apocalypse Madness.  But overall I thought the book was just okay, in large part because the early chapters felt like separate short stories shoved together because they all follow Sam.  Sure, the whole thing came together eventually, but it made for a hard time reading, at least for me.

I also agree with something my brother said in his review.  Lord of Light feels like it's going to end with a sequel.  But then it abruptly ends, which also made it less satisfactory.