The Book of Better 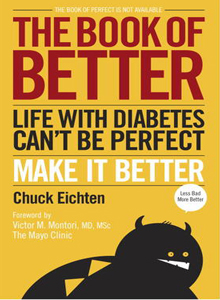 So I posted about a week ago that I have 164 books to read.  And what do I decide to read?  A library book, of course.  But this wasn't just any library book.  This was a nonfiction book about diabetes that I decided I really wanted to read right now.  For one thing, it was a pretty fast and easy read (I could tell because the majority of pages only had text on about half of the page).  And for another, if Chuck Eichten had anything to say that could make my life a bit better, there's no reason NOT to read this book right now.

Oh, I should also say that Eichten has Type 1 diabetes, which was another appeal.  Many, many books on diabetes are written about Type 2, and so don't apply to me.  Reading a book by someone with Type 1 means he gets what my life is like.  And that's pretty awesome (and somewhat rare in my experience).

So anyway, The Book of Better.  I admit that I didn't get a whole lot out of this book.  But I really enjoyed reading it.  Eichten talks about diabetes in a great way, making it easy for everyone to understand.  He goes through the basics, gives some terminology, then shares what he has learned over the years.  Eichten admits he is no doctor or expert, besides the fact that he's had diabetes for 25 years as of writing the book (I guess it would be almost 30 now because the book was written in 2011, which makes him an expert in a way.  Sure, in a lot of cases a doctor knows the technical stuff  better than a patient.  But a person with diabetes knows their own body and how things work for them better than any doctor ever could).  And over the course of having diabetes for 25 years, you are prone to make mistakes, because much of what we learn for ourselves is trial and error.  Eichten wrote The Book of Better to share some of his missteps so maybe you can avoid making them yourself.

He also has funny little anecdotes, or goofy comparisons all through the book, making The Book of Better a rather fun read.

There were two things that bugged me about it though.  For one, this book is American.  For the most part, that's no big deal.  But people in Canada measure blood sugars using mmol/L, not mg/dL.  So I had a bit of a hard time reading the chapter on blood sugars (until I broke down and started converting everything using the internet).  Sure, I could have read through the book and guessed at the numbers (and after looking them up, I would have been relatively close with my guesses for most of them).  But I would have doubted.

The other thing is kind of silly in a way.  But Eichten talks about the artificial pancreas and leaves out one crucial detail: it will need glucagon!  Glucagon is the hormone your body uses to raise blood sugar.  A successful artificial pancreas won't just be able to turn insulin delivery on or off; it will need to be able to raise your blood sugar quickly if it needs to, much as a healthy person's body can.

I admit, the fact that he left this bit out might be because the idea is newer than the book.  But I think it's important to say nonetheless.

That being said, I'm really glad I read The Book of Better.  Sure, I didn't really learn anything new for myself (I've had diabetes for almost 23 years and have an insulin pump, which I heartily agree is the best thing ever!)  But it was still a good read, which made me feel pretty good.  And yes, maybe we all need to work a little harder just to make our lives better.  Even if those of us who don't have diabetes.  Because life may not be perfect, but you can always make yours a tiny bit better.  :)
Posted by Shauna at 1:11 AM