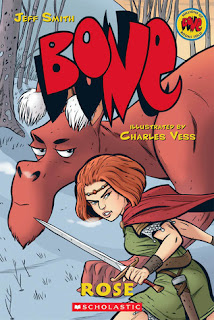 I'm not going to lie: Bone: Rose was my least favourite book in the Bone series.

But this is a story set before Gran'ma Ben was hilariously awesome.  Here she is a somewhat naive princess.  Her and her sister are sent early to complete their test to become Dream Masters (although Briar, her older sister, has a blind dreaming eye, and so wonders why she's being sent).

In a dream, Rose frees a small river dragon from a river.  The next day she finds the same dragon, who is in reality much bigger.  After fighting, the dragon leaves to go and terrorize the nearby village.

In the middle of all this, Briar, who in fact has a strong dreaming eye (she's been hiding it from everyone for years) is working to free the Lord of Locusts and unleash nightmares on all the world once again.

Okay, I admit, I'm not entirely sure if that's what the Lord of Locusts was planning on doing.  But that's what happened when he originally took over the dragon queen Mim.  Plus it sounds cool.

I hope I made the story sound exciting.  Unfortunately, I found it to be a rather bland read and I'm not entirely sure why. But the artwork of Charles Vess is gorgeous, and that's why I gave this book 3/5 stars instead of 2 on Goodreads.
Posted by Shauna at 1:04 PM