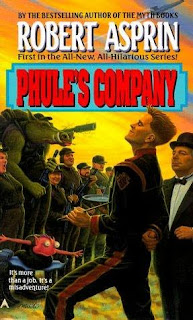 A friend at last year's 4th Street Fantasy suggested I give Robert Asprin's Phule's Company a try. This spring I found it at a local used bookstore. It sounded really funny, so I decided to give it a try after finishing both the Bone: Handbook and Rose.

Phule's Company is about multimillionaire Willard Phule, the heir to Phule-Proof Munitions. Phule joined the Space Legion, where he was going to be thrown into jail for accidentally attacking a peace ceremony. But because of who he is, the Legion decides to put Phule in charge of an Omega Company. An Omega Company is a company where the Legion sends all of its misfits. Basically the plan is to give Phule command of an impossible group of people, with the hope they will drive him to quit the Legion.  But Phule has other plans. It's his intention to take the company and turn them into an effective fighting force.
Besides, he's got experience doing this sort of thing with businesses. How hard can it be?

Phule's Company was pretty hilarious all the way through. The antics of Phule's Legionnaires (and even Phule himself) were pretty great. Phule was a very unorthodox commander, which worked wonders for bringing his bunch of misfits together (and even seeing them through to a tie against the regular army's crack troop squadron).

One thing I wasn't fond of was the book's blurb though. It set me up to expect something much bigger than what the book actually delivers. The blurb says Phule's Company is mankind's last hope. But I'm not really sure why. I mean, the final encounter was against a bunch of peaceful aliens. No one was in any danger at all (especially not all of mankind). It's possible that statement refers to something later in the series (which may or may not have been alluded to), but that's about it.

So that was Phule's Company. I enjoyed it, but the end was kind of a let down. For that reason, I'm not sure if I'm going to look for the other books in the series.
Posted by Shauna at 8:19 PM