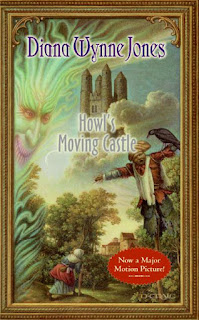 A friend at 4th Street Fantasy recommended Diana Wynne Jones this year.  So when my brother and I were coming home and found Howl's Moving Castle, I decided I had to get it.  I saw the movie years ago and remember liking it.  But other than remembering that the castle was much smaller on the inside than it was on the outside, I don't remember anything else about the story.

Howl's Moving Castle is the story of Sophie.  Sophie is the eldest of three daughters, which everyone knows means she is destined to fail at everything.  Sophie gets cursed by the Witch of the Waste, who turns her into an old woman.  And so Sophie sets out on an adventure in the hopes of getting the curse reversed.

Her adventure takes her straight to Howl's Moving Castle, which has been seen from her village moving around in the hills.  Sophie strikes a bargain with Calcifer, the fire demon who moves the castle.  If she can figure out how to break Calcifer's bargain with Howl, Calcifer will remove the curse that is on Sophie.

Howl's Moving Castle was a super cute story.  I am so glad I read it, and I really am looking forward to reading more of Jones' books (...especially since Goodreads tells me there are more stories in this series!)
Posted by Shauna at 10:18 PM