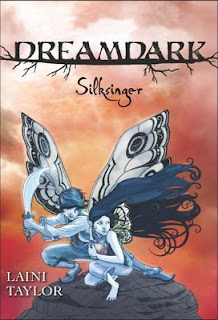 I absolutely loved the first book in Laini Taylor's Faeries of Dreamdark series (Blackbringer).  I loved it so much that I bought a copy of the second book, Silksinger, right away.

I waited too long to read Silksinger.

I read Blackbringer over two years ago.  Way too much time has passed, and I barely remember the story now (besides that it was awesome!)  So it was rather tough to get back into the series.

But that was ok.  By the time I was halfway through Silksinger, I was once again in love with Dreamdark.

Silksinger is the story of several faeries.  Once again, Magpie Windwitch is here with her family of feathers (crows) and her friend Talon.  They're hunting for the remaining Djinn, to awaken them and return them to Dreamdark.  Talon, a scamperer (he has wings that are too small to fly with), has knit himself a pair of feathered wings.  Together, he and Magpie find the Ithuriel, before going in search of the Azazel.

A continent away, Whisper's family is attacked by a swarm of devils.  Both of her grandparents die fighting them off, leaving Whisper alone to protect the Azazel.  Whisper is the last of the Silksingers, a faerie clan long thought to be dead.  Their voices allow them to manipulate the Tapestry; they were famed for their flying carpets, which haven't been seen by others in millenia.

Whisper manages to make her way to an outpost, where she stows away on a caravan heading to Nazneen.  There she meets Hirik, a lad with big dreams and even bigger secrets.  Hirik longs to find the Azazel, to become the Djinn's champion (especially now that the Djinn are awakening and Magpie has become one of their champions already).  But he is a Mothmage, a clan also believed to be dead.  As legend goes, the great warrior clan sat idly by while the last dragon, Fade, was destroyed.  The Silksingers, who were not warriors, bravely flew to Fade's side on their carpets, only to be slaughtered along with the dragon.  The Mothmages were exiled and presumed dead in the aftermath of that battle.  But in truth, they are not dead.  And neither were they the cowards everyone believed them to be: the Mothmages were ensorcelled by a ruby left there by their greatest enemy.

I will admit, Silksinger was somewhat predictable, particularly concerning Whisper and Hirik.  But it was still a fantastic read.  I am sad to know there are currently no more Dreamdark novels written.  But hopefully Taylor will get back to the series (especially since Silksinger ends on a bit of a cliffhanger - I need to know more!!!!)
Posted by Shauna at 7:46 PM