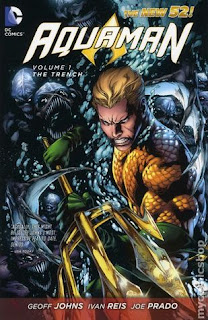 So I have recently discovered I am a fan of Aquaman.  I started buying the new comic issues because I was blown away by the story.  A friend of mine at work recommended I read the new 52 series because she really liked them, too.  So here I am, less than two hours after finishing Harry Potter and the Philosopher's Stone and I've already finished the first of this series (called Aquaman Volume 1: The Trench).  Aquaman is being laughed at on land as a silly useless superhero.  But when some mysterious creatures from the sea attack a village near his lighthouse, Aquaman will overcome prejudice to save the day!  I was a bit confused by some of the things going on surrounding the mysterious creatures (what exactly are they?  Aliens?  I don't think so but I wasn't really sure), but hopefully these questions will be answered in the next four volumes, which I've already put on hold!

Seriously, these new Aquaman stories are a lot of fun!  I recommend you give them a try!  :)
Posted by Shauna at 1:23 AM