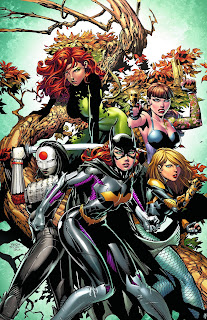 Well I totally should have read these first to save the Aquaman graphic novels for last (because Aquaman was a lot better).  Black Canary and Starling are trying to start their team (Birds of Prey).  So in Volume 1 (Trouble in Mind) they invite Katana and Poison Ivy.  That was a pretty fun team, but then in Volume 2 (Your Kiss Might Kill) Poison Ivy betrays them.  In Volume 3 (A Clash of Daggers), the Dagger clan is after Katana; after dealing with that threat, Katana decides to stay in Japan, so the Birds of Prey (who also include Batgirl, who didn't really want to join them but I guess did?) need to recruit another member.  At the end of Volume 3, their team includes Condor, a guy in a flying suit they met in Japan, and Strix, an assassin from the Court of Owls that has been plaguing Gotham City (I've never heard of it before these books).

The story jumps all over the place, even within a single volume, making it a bit hard to follow.  And even though I wanted to like these graphic novels, I really didn't care at all.  I almost didn't even bother reading Volume 3 because I just wasn't interested, but wanted to see the aftermath of dealing with Ivy (which I didn't get because they just sort of skipped ahead to the girls having been basically cured by Batman).

So all in all, this just wasn't for me.  I'll go back to reading more Aquaman instead.
Posted by Shauna at 9:15 PM