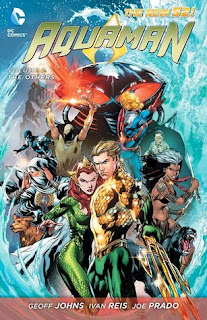 I read them all back to back so decided not to write a separate review for each of them.

Aquaman: the Others was Volume 2, which seemed to start the whole Black Manta thing (Black Manta is a villain who has also appeared in the Aquaman rebirth comic series I'm also reading but not reviewing on this blog because I'm reading it issue by issue).  Black Manta has tracked down members of the Others, a team of super people Arthur Curry worked with prior to accepting his place in Atlantis.  His teammates were armed with powerful Atlantean artifacts, which is why they have been targeted by Black Manta.  It seems Black Manta is after a hidden seventh artifact which is more powerful than all the others.  I thought that the Others were interesting, but I wasn't given enough time to get to really know them as characters which was a real shame.  Arthur kept not wanting their help (which was apparently characteristic of him in the past) but his motivation had greatly changed - where previously he didn't care about them, now he didn't want to see them get hurt.  Black Manta was ultimately successful in getting the artifact (which is the scepter that was used to sink Atlantis) but he gave it to an unidentified third party. 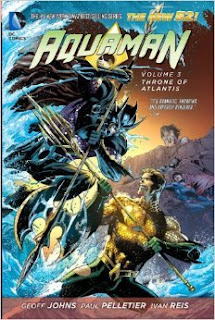 Aquaman: Throne of Atlantis was Volume 3.  This one starts off when missiles from a surface world ship are fired at Atlantis (not by humans - they lost control of the weapons through mysterious means).  The humans think it's weird that the missiles fired themselves at empty ocean (because they didn't realize that's where Atlantis was).  But then the entire Atlantean war machine mobilizes with the intent of sinking Boston as retaliation.  This volume has members of the Justice League jumping in as Arthur must decide whose side he is on.  Volume 3 involves Arthur's half brother Orm, who is currently sitting on Atlantis's throne.  Arthur worries that Orm has the scepter that Black Manta took, but quickly realizes that's not the case when Orm orders charges laid in Boston to sink the city.  The staff is revealed to command those strange creatures from the Trench (Volume 1), who attack humans and Atlanteans en masse at the surface.  It turns out that Vulko, the first Atlantean Arthur met, was behind this.  Vulko wanted Arthur to resume his rightful place as the King of Atlantis, and felt that a war was the only way to get him to do so.  Vulko is brought back to Atlantis to await trial, while Orm yielded the throne to Arthur and so must stand trial in the surface world for killing so many when he attacked Boston. 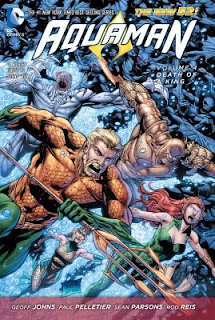 Which brings us to Volume 4, Aquaman: Death of a King.  This one was my favourite of the bunch.  The original king of Atlantis, Atlan (the Dead King) was awakened from his tomb.  He moves to reclaim his rightful place as King of Atlantis.  First he follows Mera to Xebel.  She tries to get the people of Xebel to stand with her and Arthur against the Dead King, but to her horror they side with him.  The Dead King attacks Atlantis at the same time a submarine fleet led by Scavenger attacks as well.  In the fight, Arthur is presumed dead after trying to telepathically control a monster of the deep named Topo.  Vulko got him out and cared for him while he was in a coma for six months.  After learning some uncomfortable truths about his heritage, Arthur and Vulko retrieve the scepter and call forth the monsters of the trench to help him defeat the Dead King once and for all.

Volume 4 ended with an epilogue that really makes me want to read volume 5.  Nerus, the King of Xebel, was charged by the Dead King with finding a trace of the remaining four kingdoms of Atlantis which everyone has presumed dead.  Nerus has found Orm and wants to join forces with him.  Apparently Nerus lied to the Dead King and knows where the other missing kingdoms are!  He wants to unite all seven kings to take down Arthur!  I can't wait to read it!!!
Posted by Shauna at 6:49 PM

Unfortunately it's currently out at the library so I will have to wait a week or two. :(