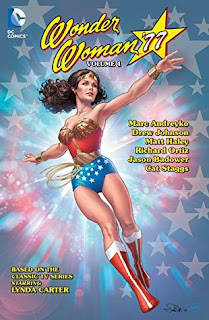 A friend of mine at work really liked Wonder Woman '77 Volume 1 and suggested I read it.  I took it out mainly because I'm honestly not that familiar with Wonder Woman.  The little I know of her is mainly from Batman things where she pops up.  I've certainly never seen the TV show with Lynda Carter.  So I figured I'd give this a shot.

Wonder Woman '77 is actually based off of the 70's TV show.  Wonder Woman in this series is modeled off of Lynda Carter.  So if you're familiar with the show, I'm sure you'll catch lots of nods to it (including the spin!)

Wonder Woman '77 Volume 1 is a collection of five stories where she battles villains in a disco, her nemesis Cheetah, art thieves, and others in her quest for justice for all.  Her ideals are very sound and it's fun to see how she solves the issues in the story (I had no idea her tiara works like a boomerang!)  Reading this definitely made me want to check out the show with Lynda Carter - hopefully I'll be able to at some point!
Posted by Shauna at 12:59 AM