Halo: The Fall of Reach 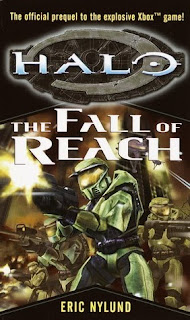 Geeze, The Fall of Reach is one of those books I've been meaning to read for a very long time (not that it is the only one...).  I think I meant to read it back around when Halo: Reach came out...seven years ago.  Better late than never, right?

You have to pay close attention to the dates at the beginning of each chapter (particularly in the beginning half) because the book jumps forward in time a bit quickly.  This doesn't happen so much later on.  I did get a bit confused though when the book totally skips the prologue battle later in the book (I have no idea what that was even part of).

The book also suffers from a lack of editing.  It's not horrible, but there were moments where this knocks you out of the story (like at the beginning of Chapter 35, when Kelly shouts something to the Master Chief, even though she's not actually present - I think it was supposed to be Linda).

I found The Fall of Reach to be a bit of a difficult read.  At times I loved it and didn't want to put it down.  But at other times I found it so boring.  And there never seemed to be a rhyme or reason for what was boring and what wasn't.  (Like sometimes I thought the space battles with Keyes were great, but at other times I wanted them to be over to get back to what was happening with the Spartans; other times it would be the exact opposite).  I liked in the earlier training bits, where the book showed how John learned teamwork and made friends.  But then we don't really get to see his friendships evolve at all - the other Spartans are just there following his orders.  I loved the scene where Cortana gets to link with him, but unfortunately that only happened the once.

That's something I also need to talk about - this story varies quite a bit from the one we're given in Halo: Reach. In the game, the Covenant infiltrate the planet sneakily and then start invading.  In the book, the Covenant show up with an armada for a full-scale invasion with the intent to glass the planet.  Cortana is already on the Pillar of Autumn at the beginning of the battle in the book, so there's no desperate attempt to get her to the ship like in the game.  And all the Spartans actually know one another in the book (unlike in the game where they don't seem to know you, the rookie to their squad).

Oh, I was also very sad to see that a lot of the cool lines from Halo 3 originate in this book....and are a lot lamer here.  And while I'm on the Halo 3 subject, it made me sad that like EVERYONE knew how lucky John-117 was (it wasn't just a Cortana thing, as she makes it sound like at the beginning of that game).

Having said all of this, I am glad I finally read The Fall of Reach.  It just ended up a lot different from what I expected.
Posted by Shauna at 6:41 PM