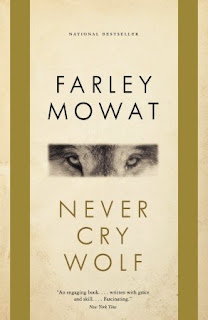 Along with giving me some books, my brother has also lent me a few.  I decided that I should really get to reading them since I've got six right now that he'd like back at some point.  I started with Farley Mowat's Never Cry Wolf because my brother insisted that I read it.

Never Cry Wolf tells of Mowat's first year studying wolves in the Canadian North.  Everyone believes that wolves are killer monsters that need to be exterminated.  Mowat is sent to study them as a scientist and find out the truth, specifically of their connection to caribou (trappers are claiming wolves are destroying the herds).

Over the course of about six months, he observes one family of wolves with the help of an Inuit friend, Ootek.  Between his observations of George, Angeline, Uncle Albert and their pups, and the insights of Ootek, Mowat quickly discovers that wolves are not remotely the monsters he has been led to believe.

Whether fact, fiction, or somewhere in between, Never Cry Wolf is a fantastic read.
Posted by Shauna at 1:11 AM