The Golden Boy: A Doctor's Journey with Addiction 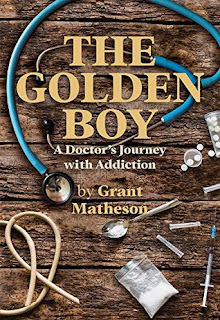 The Golden Boy: A Doctor's Journey with Addiction was a second book I got from my brother a few nights ago along with I've Been Meaning to Tell You. The Golden Boy is the memoir of Dr. Grant Matheson who became addicted to opioids while practicing medicine in Prince Edward Island.  The first part of the book tells Matheson's spiral into addiction. Opioids at first helped him function when he was overwhelmed by his practice and his divorce.  But as time went on, they helped to destroy his life.  Being a doctor, and also feeling like he had no where to turn, Matheson was determined to beat his addiction on his own.  But eventually he was found out by the Physician's College and sent to rehab.

The second part of the book is his journal from when he is in rehab at Homewood in Guelph.  The first part of the book was a bit tough to read, in major part because the writing isn't very good (which is a real shame because I think his story of how his addiction spiraled out of control is well worth reading).  But this second part is much easier to read.  At the beginning of his stay in Homewood, Matheson was given a journal.  He started writing in it because he was told to, but in the end it seemed to help quite a bit with his recovery.  He talks about the people he meets in Homewood and what he is going through.  I liked how very optimistic he always seemed in this section of the book.

After that, he writes a few parts that take place afterwards, detailing his recovery.  Matheson stumbles along the way, ending up addicted to alcohol and back at Homewood again to help his detox.  He was able to practice medicine for awhile after being initially released, but came up against some charges of fraud from when he was deep in the throes of his opioid addiction, so as of the publishing of The Golden Boy, he was no longer practicing.

While the writing isn't always great, I think this is a very valuable book to read if you've never thought about addictions from the perspective of someone suffering an addiction.
Posted by Shauna at 10:40 PM