I've Been Meaning to Tell You 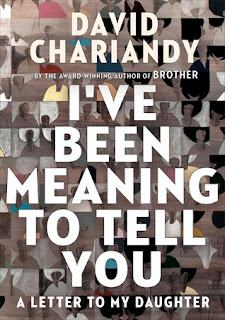 So I was hanging out with my brother last night; we wandered into his office and I started looking at things on his bookshelf.  One of the books that randomly caught my eye was David Chariandy's I've Been Meaning To Tell You: A Letter to My Daughter.  My brother said he was done with the book, so I took it.  And since it's such a short read, I read it in a night (while also taking a few breaks to get dinner and play video games for a few hours).

A decade previously, Chariandy struggled to explain to his then three-year-old daughter a moment of bigotry she witnessed.  He ended up penning her this letter in the aftermath of the 2017 American Presidential election, where Donald Trump was elected in a very divided country.  He strives to explain to his daughter her racial heritage, particularly the heritage of his parents who are South Asian and African migrants from Trinidad (and who overcame much hardship to get themselves to Canada).

I enjoyed reading about the family dynamics between the various generations of Chariandy's family, and even about Chariandy's past growing up in Scarborough as a visible minority.  Unfortunately I've Been Meaning to Tell You never seems to go much beyond just a surface description of the discrimination visible minorities face, which is a real shame; this book could have been much deeper than it is.
Posted by Shauna at 1:07 AM