The Librarian's Guide to Homelessness: An Empathy-Driven Approach to Solving Problems, Preventing Conflict, and Serving Everyone 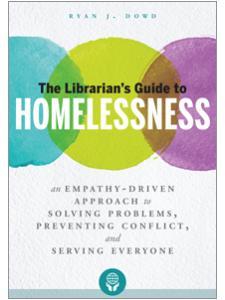 Alright, I have a confession to make: I've had The Librarian's Guide to Homelessness by Ryan Dowd out from my library for a few months now.  I attended a webinar by Dowd that was very informative and learned that we were also getting his book.  I put my name on the list (I was the only one!) and got it when it came in.  Then it sat on my shelf.  I'd renew it to the maximum.  Bring it back and check it out again.  Repeat.  So a few weeks ago, I finally started reading the darn thing.  Being a text book, even though it is interesting (and at times entertaining), it still took a bit to read through (and I put it aside once or twice to read other things like How to Walk Away).

As the sub-title suggests, The Librarian's Guide to Homelessness looks at how to solve problems and prevent conflict with homeless patrons in a library.  Libraries across North America are finding that they are serving more and more homeless patrons.  Dowd is the executive director of Hesed House, Dowd's local homeless shelter; he has spent his life volunteering and later working at the shelter, so he has a lot of insight into and experience dealing with homeless individuals.  While homeless individuals are similar to people of a middle-class background (we are all human, after all), there are some distinct ways homeless individuals are culturally different from middle class individuals (in a similar way upper class individuals are different from middle class individuals, etc).  Dowd gives a break down of the differences (in brief, homeless individuals tend to have a smaller vocabulary, so they are more attuned to nonverbal cues and also use voice a raising voice volume to show whether they are mildly angry or spitting mad), shows you how to use your head, body, and words to speak with homeless individuals, and later goes into some more advanced problem solving tools.  Dowd also makes it plain the difference between "fire tools" (tools that use punishment as an incentive) and "water tools" (which are tools which use empathy rather than punishment).  In his experience, the water tools generally work best (but there are some instances where you will have to resort to fire tools; Dowd just wants you to exhaust your water tools first before escalating to fire tools).  The beauty of the empathy driven approach is that it will work with pretty much all people, not specifically homeless individuals.

I do need to note: the majority of this book is a list of various tools you can use for dealing with different people and different situations.  For that reason, the book is a bit of a slower read; there were only so many tools I was able to read one after the other before I felt myself nodding off.

A lot of the things Dowd talks about in The Librarian's Guide to Homelessness were actually covered in the webinar I attended (he just goes into a bit more detail here in the book), so that made the book seem oddly familiar (I ended up treating it kind of like a refresher at times).  If you haven't attended one of Dowd's training or webinar sessions though, you won't feel like this while reading the book.

Oh, and I want to say that I loved reading Dowd's anecdotes at the beginning of each chapter.  They were always entertaining (while still informative for the chapter).  Dowd definitely has a natural gift for storytelling. :)

Overall I think this book is a good read for people working in libraries and other industries where they deal with a lot of homeless individuals (although the book is specifically geared for libraries, so keep that in mind if you work in another industry).  It's also a good read for people who are interested in hearing about the differences in culture between middle class individuals and homeless individuals.
Posted by Shauna at 12:52 PM