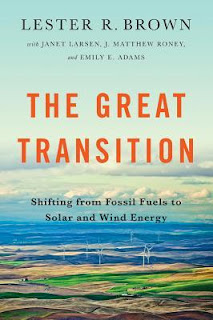 So all in all, I'm glad I read The Great Transition.  It is a book that is full of hope for the future: the technology was here in 2015 to cheaply harness solar and wind power, and it will only continue to get better.  But honestly, you're better off waiting for a revised edition of this book to come out.  Or just check out Just Cool It!, which talks about the different resources that are available in the here and now to replace fossil fuels without the very specific and out of date facts and figures.
Posted by Shauna at 11:05 PM