The Soil Will Save Us: How Scientists, Farmers, and Foodies Are Healing the Soil to Save the Planet 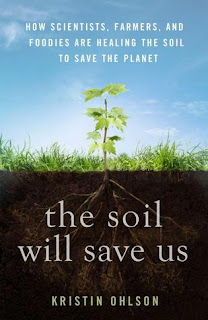 The Soil Will Save Us looks at how various people (namely farmers, scientists, and foodies, as per the subtitle) are working on healing the soil.  Healthy soil is more productive, so it's in everyone's best interest (more productive = more food for the billions of people on the planet).  But healthy soil also sequesters carbon from the atmosphere.  So it's quite possible that healing the soil can save us from global warming, too.

The soil has released a lot of carbon that used to be previously safely sequestered in it.  Prior to the industrial revolution, this carbon was released thanks to agriculture; the soil did not evolve with anything plowing it and disturbing the microbes and fungi that reside underneath.  The microbes and fungi work together with plants in a vast trading network, trading carbon from plants for the other nutrients that the plants need.  When the soil is disturbed, the carbon that was sequestered in it is released into the air (it binds with oxygen), leaving the microbes to starve.

The methods for building soil carbon aren't glamorous, which is why politically people tend to ignore them.  They also don't need vast amounts of money (or chemical fertilizers), so the big companies who rely on selling farmers and gardeners fertilizers and other things also want nothing to do with them (these methods cut into their profits).  They're also very hard to look at scientifically: the soil is a vastly interconnected ecosystem, and often parts can't successfully be removed to be studied on their own.  And many studies find funding for three years, while it can take 5 or more to see a difference in soil.

But despite these hurdles, there are many people around the world who are conducting their own experiments on their farms.  And they're seeing some amazing things: like how their soil retains water in droughts compared to their neighbours' soil, or just how much food their healthy soil produces.  This book filled me with hope for the future, that maybe we can feed everyone and save the climate in such a low-impact way. :)
Posted by Shauna at 11:46 PM