Injustice vs Masters of the Universe 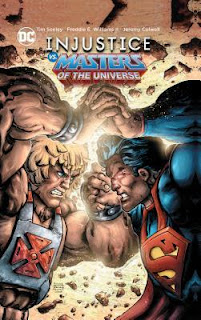 It starts with He-Man vanquishing a robot named Faker, who had taken control of Eternos, Capital City of Eternia.  But the civilians berate He-Man for liberating them, because under Faker, they felt safer.  He-Man tells them that he fights for their freedom; Faker was a dictator who tortures people and strips the civilians of their voice.  Zatanna and Swamp Thing overhear this, and decide that He-Man is the perfect man to recruit in their war against Superman back home.  After the Joker tricked Superman into killing Lois and their unborn child, Superman established a totalitarian regime to stop such tragedy from happening again.  Unfortunately, many suffered under his tyranny.  He was overthrown once, but after Brainiac attacked, he was released.  Afterwards, Superman reestablished his regime.  With the Sorceress's blessing, He-Man, along with Teela and Orko, accompany the Justice League to Earth.  Swamp Thing, Starfire, and Cyborg remain on Eternia to help out in He-Man's absence.  Unfortunately, not long after He-Man leaves, Darkseid arrives with the intention of wresting the Anti-Life Equation from the spirit who resides within Castle Grayskull!

Injustice vs Masters of the Universe was such a fun romp.  I absolutely loved it and would love to read more (which the book clearly lends itself to - Hordak running Apokolips, anyone?)
Posted by Shauna at 1:29 PM