Urban Cycling: How to Get to Work, Save Money, and Use Your Bike for City Living 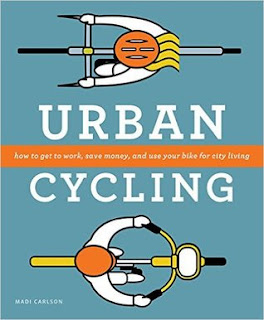 Wow, so I just realized that it only took me six days to read Urban Cycling: How to Get to Work, Save Money, and Use Your Bike for City Living by Madi Carlson.  I honestly felt like I had been reading it for weeks!  The problem is that it's a reference book, not meant to be read cover to cover (much like You Grow Girl, it's a reference book).  I was actually surprised to finish it earlier this afternoon, because it really felt that slow going.

Carlson covers all things bikes with the intention of getting you set up for commuting by bicycle.  She has some very in depth chapters on the parts and types of bikes, gear, and riding. I surprisingly was quite interested in the chapter on riding with kids; I really liked her break down of the different options for seats, bike trailers, etc.  I do suspect that the book is more for beginner cyclists (or beginner cycling commuters) rather than more experienced people, but I thought it was a very good reference book all the same.

My biggest complaint (besides the fact that this book should not be read cover to cover) is the lack of pictures, particularly to demonstrate bike repairs.  I had a really hard time trying to understand that chapter.  So if you're hoping for a bicycle repair manual, you'd be better off reading something else or going online - I'm sure there are good Youtube videos.

The other issue that I had is that Urban Cycling is very much American.  This is a personal thing, because I am Canadian, so many of the resources she mentioned in the text didn't apply to me because they were all centered around American cities (although there were a few organizations and events that were worldwide, or at least also in Canada).  I didn't really check the resource section at the back of the book though, so it's possible that some of the books and blogs she mentioned are Canadian as well.

So overall, Urban Cycling is a great book to get you started if you're interested in commuting to work via bicycle.  But it doesn't lend itself to reading cover to cover; flip through it and read the parts that interest you instead!
Posted by Shauna at 1:54 AM