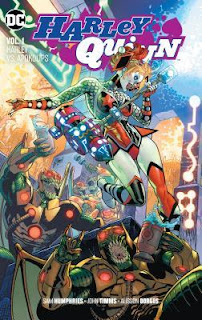 I've really enjoyed reading about Harley Quinn's adventures. So when the local library stopped subscribing to Hoopla (which is how I was reading the graphic novels), I bought the next two graphic novels then asked my local comic shop to start putting them away monthly for me. I didn't get to them right away (Harley Quinn Vol 2: Harley Destroys the Universe, wasn't due out for a fee months); in the meantime I actually stopped getting comics. When I had trouble sleeping last night, I finally sat down to read my stash of Harley Quinn, starting with Harley Quinn Vol 1: Harley Vs. Apokolips. The numbering has restarted on the graphic novels because a new creative team took over the run (but the individual comics retain their current numbering).

In Harley Vs. Apokolips, Harley is on a much needed vacation, when Granny Goodness sends two of her Female Furies to bring Harley to her. Granny Goodness thinks Harley will be perfect for her plans. Harley is wowed by Apokolips (and the chance to be Hammer Harley rather than regular old Harley Quinn). Harley has fun on the world of chaos at first, but once she understands exactly what Granny Goodness is doing, Harley can't sit idly by while innocent people are sent to die.

I have to admit, I didn't enjoy Harley Vs. Apokolips as much as I have enjoyed previous volumes. For one thing, I often found the action (and even parts of the story like when the Female Furies succeed in kidnapping Harley from her vacation) hard to follow. There also seemed to be gaps in the story, where it seemed to jump ahead a bit. This was most clearly driven home when I discovered that issues 43 and 44, while included in the graphic novel, were put after the Harley Vs. Apokolips storyline (so I didn't get to see Harley going crazy and seeing things, and hence her need of a vacation, until afterwards).

Harley also didn't quite seem like herself. She seemed just crazy throughout this graphic novel; she was missing that bit of lovableness she normally has (this was driven home when she said to her beaver, Bernie "This is the price I pay for bein' the life of the party all the time. Ya want the good crazy? Well this is the ugly crazy that comes with it." This just didn't seem like her because she's pretty much always the good crazy - and that's what I want to read). You also don't get to see much of her friends in this volume, which was a shame since they're all super fun, too.

So I soldiered on with Harley Destroys the Universe.... 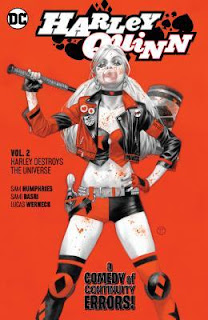 And what a weird graphic novel that was! It started with issue 50, where Harley and Jonni DC, Continuity Cop chase after a comic book that is breaking DC continuity. That is followed by issues 51 and 52, where Harley is dealing with Captain Triumph, a golden age superhero who got caught in her continuity. Issues 53 and 54 then have Harley making online videos so she can pay for all the damage she and Captain Triumph caused (but a new super villain names Minor Disaster keeps ruining her videos in an attempt to impress her father, Major Disaster). And then the graphic novel skips issue 55 for some reason (a friend later told me it was most likely collected in a DC Christmas graphic novel because it was a Christmas story), going straight to issue 56, a weird story where Harley tries to give away cats (because she's suddenly allergic to them? I could have sworn she had cats and dogs in the past!) but a chain of men pet stores take exception to this because she's a woman. I don't even know where this story came from...it was totally random and didn't really fit with the world of Harley Quinn while also being one of the most Harley Quinn stories out of the whole graphic novel.

Harley Destroys the Universe did briefly bring Eggy back, but otherwise once again mainly avoided Harley's friends from earlier in the series. I'm also not sure why her mom keeps showing up to hang out; earlier in the series it was a big deal that her parents were coming to visit.

While Harley Destroys the Universe was missing issue #55, I happened to have it (I remember reading that the graphic novel was only going to collect issues 50-54). So after finishing it, I read the remaining issues I had (so up to issue 61).
Issue 57 starts a big story line where Harley is given the chance to become the Galactic Angel of Retribution if she can make it through 6 soul-searching trials.  So 57 and 58 are her first trial (she was framed for murder and teams up with Batman to find the real culprit - the trial ends with her proving to herself that she is worthy of a second chance).  The second trial is in issue 59, where Harley wakes up to discover she is turning into a bug (she was cursed by witches, who magnified an ugliness inside of her).  Issue 60 is the third trial, where a vicious alien swarm has taken over a science lab that Harley just happens to be breaking into to find an experimental cure for her mother's cancer.  After passing her third trial, issue 61 sees her off on a girl's night out with Catwoman and Tina.  Harley and Tina are playing a board game some old lady gave to Harley for free; Harley didn't realize the lady was the Enchantress, who has ensorcelled Gotham City.  Only Harley remembers the way things used to be!
I'll admit that I enjoyed issue 61.  But overall, I really haven't been a fan of Sam Humphries' take on Harley Quinn.  :(
Posted by Shauna at 4:04 PM