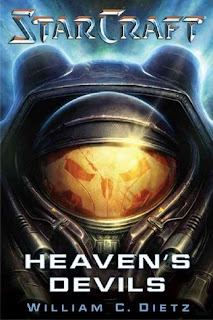 I've been playing a lot of the Starcraft 2 co-op missions with a friend lately.  I was specifically levelling up co-op commander Tychus Findlay.  Along the way I remembered that I had Heaven's Devils by William C. Dietz, which tells the story of how Jim Raynor met Tychus.  I decided to read it because I wanted to learn more about all the other people in the squad.

So imagine my surprise when not a single one of them showed up in the book!   >:(

Heaven's Devils is the story of how farm-boy Jim Raynor, along with a couple of his friends, decided to join the Confederate marines.  Raynor's family, along with many other folks, had fallen on hard times thanks to rising taxes and dealing with supply rationing because of the Confederacy's war against the Kel-Morian Combine.  Giving his sign-up bonus to help his parents out, Raynor finds himself at bootcamp and later on the front lines where he meets Tychus Findlay.  For his part, Findlay is a thief who is working on "Operation: Early Retirement;" he tries to make a quick buck by liberating whatever he can from the Confederacy army and selling it on the side.  While the two are opposites in a lot of ways, they become great friends while working together along with their other squad mates.

Instead of the Heaven's Devils from the game, this squad also includes Tom Omer (Raynor's friend from home who is killed in action during his first mission), Hank Harnack (another "friend" from home - Raynor and he start off as enemies but somehow become friends), Ryk Kidd (aka Ark Bennet, who was kidnapped and forcibly recruited into the Confederacy army, only to discover he is a better sniper than he was an heir to one of the Confederacy's Old Families), Connor Ward (he lost his family in a Kel-Morian raid, and so lives only to kill as many of them as he can), Max Zander (a kind-hearted man who grew up in the slums), Lisa "Doc" Cassidy (a drug addict who was recruited by a superior officer to spy on the rest of the squad), and Hiram Feek (a technician who builds marine armor).

Heaven's Devils is a really odd read.  The story continually jumps forwards in time, glossing over events to move the plot forward.  For example, after Raynor and Harnack become friends, the book skips ahead a few weeks and suddenly they're friends with Kydd, too.  I would have loved to see some of that because Kydd probably didn't fit in with the other recruits at all at that point in the story.  Or later, the book will give snapshots of conflicts, then skip ahead to a few hours or days later when everything is over.  It really wasn't satisfying as a result.  Thankfully the end conflict played out without these time skips; I was getting more into the story at that point and would have been quite annoyed if it did.

All in all, Heaven's Devils was an okay read.  Even though they weren't who I expected to read about, I did enjoy the characters, and it was an interesting look at just how corrupt the Confederacy was before the events of the original Starcraft (and before Arcturus Mengsk took over).  But I would have preferred it if the book actually showed a lot more of what happened rather than skipping ahead the way it did.