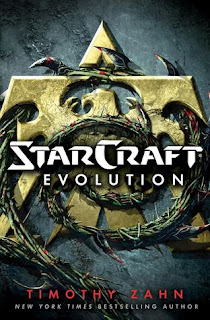 When I saw that Timothy Zahn had written a Starcraft book, I was intrigued.  I've read a few of his Star Wars books sometime before I started this blog and they were quite good.  So I was curious to see what he would do within the Starcraft universe.

In Starcraft: Evolution, Emperor Valerian receives a distress call from the zerg's Overqueen, Zagara, who requests terran aid against the protoss. The three races have had a cease-fire since their war against the xel-naga Amon, but this peace is tenuous. Along with his Admiral, Matt Horner, he brings the Hyperion to the world of Gystt where the protoss Hierarch, Artanis, is already in orbit.  Gystt was glassed by the protoss a decade ago; everyone is stunned to see the world teeming with life.

While Artanis and Valerian agree to speak with Zagara in person so that she may explain how the zerg has brought new life to the world (and how they may help rebuild some of the devastated worlds of the terran and protoss), Valerian sends a research team to investigate.  Made up of four terran (a marine, a reaper, a ghost, and a scientist) and a protoss (who has been with the ghost academy for a few years because his people did not want him back), Zagara assures everyone that the team can go wherever they like and will not be harmed.  But the team is attacked by a new breed of zerg, one that has distinctive red markings and psionic power that can cripple the protoss and psionic terrans in battle.  And Zagara claims no knowledge of this breed...

I really liked Starcraft: Evolution.  As I have played the games (especially Starcraft II), I kind of knew exactly who was behind what was going on.  But that didn't take away from my enjoyment of the book.  While the political stuff between Valerian, Artanis, and Zagara was interesting enough, Starcraft: Evolution really shines when it comes to the adventures of the research team.  I loved their dynamics and would be totally up for reading more of their adventures in the future!
Posted by Shauna at 12:58 PM