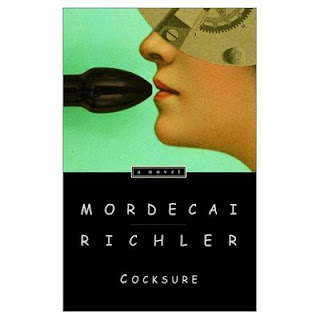 I went shopping for a few school books before Christmas. My professor sent me the list of books that we would be looking at, and I wanted to get a bit ahead. For Canadian Prose, I chose to read Cocksure by Mordecai Richler first, which ended up to be a bit of a mistake; as it turns out, Cocksure is the last book we will be covering.
But other than that, Cocksure was a rather excellent read. It kept me entertained all the way through. There was no point in this book that I didn't want to know what happened next (although there were a few points where things seemed to randomly come up and were a little confusing).
Cocksure follows Mortimer Griffin, a Canadian publisher living in England. His publishing house is taken over by Hollywood tycoon the Star Maker, and Mortimer is accussed of being an anti-Semite Jew. There are many wacky characters, from Mortimer's elementary school teacher Miss Ryerson to Mortimer's germaphobe wife Joyce. Cocksure is a wacky satire that you will never forget!
Posted by Shauna at 2:13 AM