School Book: Valley of the Dolls 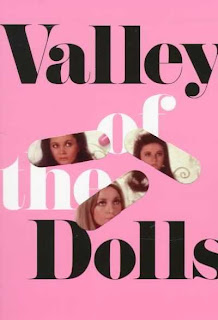 I'm not going to lie; everything that I have read since Batman Hush (heck, you can include Hush) has been read in an effort to avoid having to read Valley of the Dolls. If it hadn't been on the reading list for my popular fiction class, I would not have read it. It's not that there was anything inherently wrong with the book (it is a best seller, and amazingly still in print even though Jacqueline Susann passed away over thirty years ago). No, I just wasn't interested in the genre (Valley of the Dolls reminded me of Sex in the City in book form . . . well, I guess it would really be the other way around as Valley is far older).
Valley of the Dolls is the story of three women, Anne, Neely and Jennifer, as they meet in New York, become famous, and inevitably fall from grace (or in Neely's case, rise and fall repeatedly). The novel opens with Anne, the innocent and naive girl from Lawrenceville. She moved to New York seeking adventure, trying to escape the prescribed life of Lawrenceville. She meets Neely right away, as they live in the same apartment building. Neely is a young performer who is trying to make it on Broadway. With Anne's help, she inevitably becomes a star.
Jennifer is also in New York at this time. She has been in the papers everywhere, famous for marrying a prince and then demanding an annulment just four days later. Jennifer is gorgeous, but deemed to have no talent what so ever. She meets up with Anne several times, but only after helping her out do they become friends and eventually roommates. It is around this point (about 100 pages into the book) that I finally started to enjoy it.
Valley of the Dolls is filled with terrible people. Only Anne seemed to be a good person, believing that all people are good, and inevitably being taken advantage of by some of those who mean the most to her. Neely became a tyrant whenever she was a star. And Jennifer, although usually alright, seemed a bit two-faced from time to time. Overall, once you get into it, Valley of the Dolls has a good story, one that will sucker you in much like a soap opera, leaving you wanting to know what happens next to everyone. If you like gossipy intrigue, then this book is very much for you. But even if you don't, give Valley of the Dolls a chance. I think it is a book worth reading at least once.
Posted by Shauna at 12:48 PM