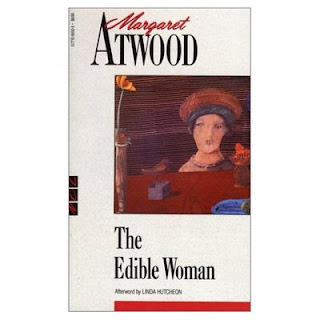 The Edible Woman started out as a typical story. The main character, Marion, goes about her life; she works for a survey company and lives with a roommate. She goes out for dinner with her boyfriend and an old friend from college. And that's when it happened: she had a couple of panic attacks and ran away.

Yes, the main character literally runs away. Her boyfriend and friends have to chase after her. It was so random! I really couldn't believe it! But it happened! To top off the randomness, her boyfriend eventually catches her, and although he is rather annoyed with her, he proposes to her!

The book takes another weird turn at this point. Part 1 was written in the first person perspective. Part 2 is all written in the third person perspective. I didn't really understand it at the time, but once you get to the end of the story, it all makes sense. Anyway, part 2 is where it starts to happen: Marion slowly loses the ability to eat. It starts with meat; her stomach and mouth rebel whenever she tries to eat meat. She starts thinking about whatever she is eating in terms of what it once was. But steadily, she stops being able to eat eggs, vegetables, and then everything!

I was really impressed by Atwood's work. The Edible Woman has incredible descriptions throughout its pages. The characters were distinct and believable. I enjoyed every word of it! This book is definitely a great introduction to Atwood's work!