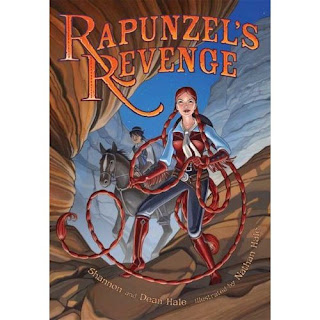 When I was at work the other day, I came across Rapunzel's Revenge by Shannon and Dean Hale. It sounded absolutely ridiculous so I had to give it a try. And having just finished it, I'm really glad that I did!

Rapunzel's Revenge tells the story of Rapunzel. She grew up in a villa like a princess, but bored to tears. On her 12th birthday, she climbed the wall that surrounded the villa and discovered many shocking truths. Mother Gothel was ruling the land by controlling the growth of plants. Mother Gothel had kidnapped Rapunzel from her parents. And Rapunzel's real mother was still alive but a slave. Highly objecting to this, Rapunzel was taken into a forest and locked up in the trunk of a very tall tree. Four years later, Rapunzel has managed to escape with the help of her incredibly long hair. So now she's out to free her mother and stop Mother Gothel once and for all!

Yes, it was an incredibly ridiculous tale (I mean, the heroine defeated everything by whipping it with her stupidly long hair!) But it was also highly entertaining, and definitely worth reading. Especially if you like fairy tales with a twist!