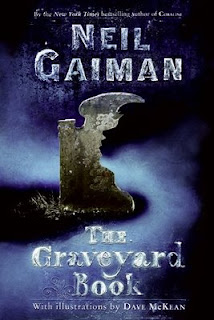 I started Neil Gaiman's The Graveyard Book yesterday. I had just finished my last midterm, and I was waiting for a friend. So I started reading. I was immediately drawn into the story, as only books by Neil Gaiman can do.
The Graveyard Book starts out on an incredibly sad note. The man Jack has murdered a man, woman, and their child. He has only to murder their baby and his job is done. But when he ascends to the baby's room, the crib is empty; the baby has escaped and wandered off into the night to the graveyard. While there, some of the ghosts take pity on the baby when his newly dead mother screams for someone to save the child. And so a dead couple by the name of Owens take in the baby, naming him Nobody.
The Graveyard Book follows Bod Owens' life growing up in the graveyard. Given the Freedom of the Graveyard, Bod is free to explore. But he must be careful to stay within the graveyard, for the man Jack still hunts him.
The Graveyard Book was a joy to read. Some of the chapters are stand alone short stories (Chapter 4: The Witch's Headstone" was first published separately), making for fun adventures along the plot. And the entire story was well put together, with everything coming nicely together at the end. A wonderful book from a wonderful storyteller!
Posted by Shauna at 12:49 AM