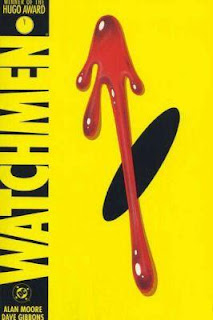 A lot of people whom I talked to said that Alan Moore's Watchmen would take awhile to read. So I put off reading it for quite awhile; I didn't want Watchmen getting in the way of school books. But now that it is Study Week, and the movie is coming out in a few weeks, I figured that now was a good time to read. I was a bit surprised when I finished it a few minutes ago, having only started the book yesterday afternoon.
Right off the bat, Watchmen is very intriguing. A man is murdered in his New York apartment, attracting the attention of the police and a masked vigilante named Rorschach. It turns out that the murdered man was another vigilante known as the Comedian. And so Rorschach sets out to try to find out who killed him, and decides to warn the other heroes of New York that there might be a "mask killer" out to get them.
The characters were all great. The most intriguing of the lot was Jon, or "Mr. Manhattan." Of everyone, Jon is the only "superbeing" that exists in the Watchmen world; all the other vigilantes are normal humans who dress up and fight crime. Jon has immense power that is difficult to comprehend, being able to see atoms and even time passing.
The art deserves a mention here as well. Dave Gibbons uses a gritty style that really suited the whole graphic novel. I don't think it would have had the same impact without him.
All in all, Watchmen was definitely worth reading. I was drawn in from the first, and really didn't want to put it down. Everything was well written, including the filler little articles and stories between chapters. Everything seemed to come together in the end. I did find the ending a bit anti-climatic though. It was still good, but it wasn't what I was expecting. But that doesn't stop Watchmen from being a good story that everyone should read at least once!
Posted by Shauna at 1:21 PM