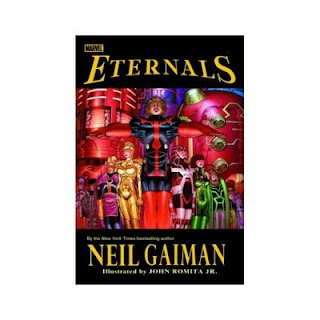 I am not a huge Marvel reader. I know a bit about the main Marvel heroes, and that's about it. But when my friend bought me Eternals, which was written by Neil Gaiman, I was excited and couldn't wait to give it a try.
Right off the bat, I found it a little bit weird. Not the Eternals themselves. But the fact that Stark (Iron Man) was on the scene struck me as rather odd. From the outset, Eternals felt like it should be its own self-contained universe, and not part of the Marvel universe. (Apparently this sentiment was echoed by Gaiman himself. In the interview at the end of the story, Gaiman said he felt the same way when he first read Jack Kirby's original Eternals series).
But if you ignore the fact that the Eternals feel shoe-horned into a universe that they do not belong, you are left with a fun and very neat idea. The Eternals were created by the Celestials to protect and fix the machine that is the Earth. They are 100 perfect, immortal beings, each with different powers. They have been here since the beginning of time, and remain with us today. But about 30 years back, something happened and the Eternals lost their memories. Only one, Ikaris, has some idea of who they are, but to the world he sounds only like a raving lunatic. And so it is up to him to attempt to find the others and help them remember who they are before the Eternals' counterparts, the Deviants, succeed in reawakening the Celestial who has been imprisoned beneath the Earth.
Posted by Shauna at 4:58 PM