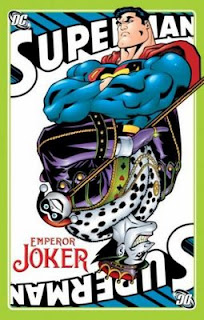 Normally I prefer Batman stories, but while I was at work this last Saturday, Superman: Emperor Joker caught my eye. It looked fun, and it screamed a Batman/Superman crossover, so I decided to give it a shot. And I wasn't disappointed.
Superman: Emperor Joker opens in a strange alternate reality. Superman is a criminal, accused of murdering Lex Luthor. Villians like Bizaarro are considered the heroes. And for some reason, it keeps raining pies . . .
Yes, the Joker has managed to get God-like powers. He has remade the world into his dream, whatever that dream happens to be at the moment. Everything is opposite, and only the Man of Steel seems to realize that everything is wrong. And every night there is the unearthly scream . . .
Yes, Superman: Emperor Joker was a great story. It was a bit of a crossover, but I enjoyed every minute of reading it. From Bizarro's opposite talk to the Joker's cruel insanity, this was a good story for everyone who likes the DC Universe.
Posted by Shauna at 4:13 AM