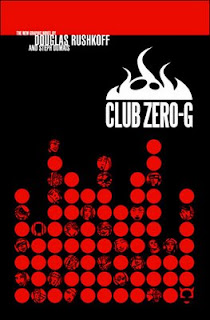 I picked this graphic novel up for $1 from Chapters the other day. The back of the book sounded intriguing; it spoke of dreams being portals to other worlds, worlds with all of your friends, but you were the only one who could remember. So after Reaper Man, I decided to give this a shot. It wasn't very long, and I figured it would be an entertaining $1.
Well, it was....something. Club Zero-G started out delivering what it promised on its cover. But then things took a radical step to the weird. There was some sort of military from the future that wanted to squash individuality (I guess in the way of Equilibrium) but it is very undefined. They were fighting some future kids, who then created Club Zero-G for some reason involving this kid from the past, Zeke. There's only really one dream world portal, and that is to Club Zero-G. Otherwise, there's a confusing point near the end with multiple realities, but that's it.
The whole graphic novel was very hard to follow. The story wasn't really that great, and I wasn't a fan of the artwork. But for $1, I can't really complain. If you can't find it for a dollar, but really want to check it out, then I recommend borrowing it from the library.
Posted by Shauna at 1:52 AM