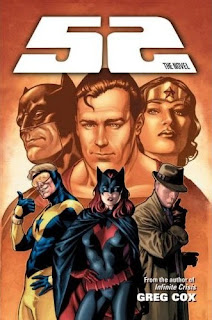 I found Greg Cox's 52 at work one day. It sounded rather interesting, so I brought it home. Now that I have finished it, I have to say that I am extremely surprised that I managed to actually get through it. 52 was just a really slow read. I kept reading, but at the same time I kept asking myself "why am I reading this again?" I felt that I never really cared about what was happening.
52 is a book written about a comic book series of the same name. I discovered this only after I started reading it. But anyway, it takes place after some crisis that I don't know anything about, and just assumes that the reader knows what is going on. There are 52 chapters in the book, one for every week of the year following the crisis. 52 follows a few new superheros: Booster Gold, ex-football player from the future turned 21st Century superhero, his robot sidekick, Skeets, The Question, a guy with no face, Batwoman, Black Adam, the evil Captain Marvel, and Renee Montoya, an ex-cop who doesn't have any special powers to speak of other than getting drunk and having one night stands. In the aftermath of this crisis, the big three superheros, Superman, Batman and Wonderwoman, are missing in action. So we have these other people we're following in lieu of our favourite heroes. Can you tell I'm a bit bitter? I was thinking Batman might make a bit more of an appearance in this book. But instead I spent a good chunk of the story following Black Adam and being confused that Captain Marvel is a DC superhero.
Anyway, Booster Gold's career goes quickly down the tubes as things go extremely wrong for him; Skeets seems to have inaccurate records of the 21st Century. To make matters worst, Booster gets upstaged by a new hero, Supernova. Black Adam finds love again after 3 thousand years alone. His new love, Isis, brings out the gentler side of him, getting Black Adam to help the people of his country rather than killing and planning war against the Western Superheroes. Batwoman barely makes any appearances. And the Question and Renee are looking into some weird crime syndicate, breaking into warehouses, and just generally globetrotting. The crime syndicate, Intergang, had thugs who could mutate into were-beasts of every variety. I take it that this was just because it was cool; this is never really 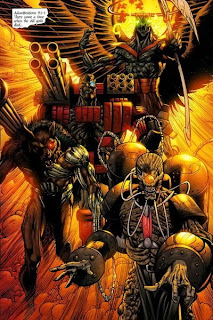 explained in the book.
So things carry on like this for a couple hundred pages. A whole lot of nothing seems to happen through most of the book. And then suddenly, these scientists unveil the Four Horsemen of Apokolips, these weird robot/cyborg/I don't know what monstrosities, to go after Black Adam and his family. They were really cool, providing one of the most exciting scenes in the novel to that point. Here's a picture I found of them from the DC Wiki. They are Yurrd the Unknown (the werewolf in the picture, personifying Famine), Roggra of the Seven Atrocities (the man-tank, War), Zorrm the Desolate (the thing in the front right. Pestilence), and Azraeuz the Silent King (the awesome thing in the back, Death).
A lot more action happens in the latter part of the book, but even here it seems ponderous. 52 always seemed hard to keep reading. It was only pure stubbornness that kept me reading it. I'm not sure how the comic series would be, but whether it is better or worse, having read this novel does not make me want to find out.
Posted by Shauna at 2:13 AM