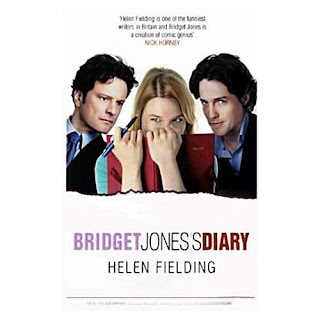 If this hadn't been a school book, I would never have finished it. In fact, if this hadn't been a school book, I would never have read it in the first place. But it was.
Helen Fielding's Briget Jones's Diary reads kind of like a soap opera. Once you start reading it, it gets a bit hard to stop; you want to know what happens next. But once you do stop reading it, then it gets sort of hard to pick it up again.
Bridget herself is not the most wonderful character in the world. She is absolutely obsessed with her weight, weighing in at the beginning of most entries. Her weight seems to fluctuate magically; she gains weight after a night of little to eat and drink, and magically loses pounds after a night of gluttony. She has zero self esteem, judging her worth based on the presence or absence of a boyfriend, or by the availability of people to talk to.
Bridget Jones's Diary follows a year in the life of Bridget. The books starts out when Bridget is forcefully introduced to Mark Darcy by her family and parents' friends. The meeting goes terribly, and Bridget is thankful when she can finally leave the gathering. Meanwhile, back at home, Bridget has a humongous crush on her boss, Daniel Cleaver. They start flirting and Bridget gets relatively confused about their relationship. Meanwhile, her mother has left her father and is seeing a man named Julio, denying that anything is going on because she is 'just firends' with him.
In my opinion, Bridget Jones's Diary was a terrible book. It looks down on women, like they have an 'expirary date' that is somewhere right around the age of 30. Throughout its pages, it seemed to think that women older than about 20 are worthless if they are unattached to a man. But at the same time, a lot of the married people in the book have a hard time as well. They're supposed to be happy, but end up miserable when their other halves leave them/have affairs/etc. As I said, a terrible book with terrible characters and terrible ideals.
Posted by Shauna at 5:59 PM