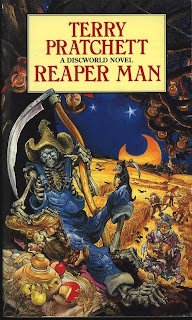 I have to admit that I was rather hesitant to read another Discworld novel. I have read both The Colour of Magic (twice!)and The Light Fantastic and I really didn't care for either of them. But a friend of mine assurred me that these two were the worst of the lot. Recently, another friend of mine really wanted me to give Discworld another try, so I settled on reading Reaper Man (which a third friend of mine swears by).
Reaper Man is a book about Death's retirement. The keepers of the cosmos (I'm not entirely sure what they were, so I just gave them this name) decided that Death had gained a personality, so it was time for him to be replaced. He was informed of his upcoming death, and so he decided to take the Time he suddenly found himself with and live a little.
At the same time, a wizard by the name of Windle Poons has been waiting to die. And being a wizard, he is informed of his appointment with Death, and awaits the time when Death comes in person to bring him to the afterlife. But at the appointed time, Death does not show (as he's in retirement). Windle dies, but after waiting around for a bit, he decides to return back to his body, and thus becomes a member of the undead.
The book goes back and forth between Death and Windle at this point. Death is helping out on a farm, awaiting the harvest. And Windle is trying to properly die.
I started Reaper Man yesterday. And I really didn't want to put it down! I found the character of Death to be hilarious, especially as he was trying to understand the humans he was now hanging out with. I think my favourite part was when he was trying to get a job with Miss Flitworth; that really made me laugh. And so my recommendations are the following: do NOT start reading the Discworld series by reading The Colour of Magic and The Light Fantastic. These two definitely turned me off from the series. A friend of mine recommends that you start around Wyrd Sisters or later. And secondly, give Reaper Man a shot. It was a light read, rather rediculous, but highly entertaining. This was a nice break from school books!
Posted by Shauna at 12:05 AM