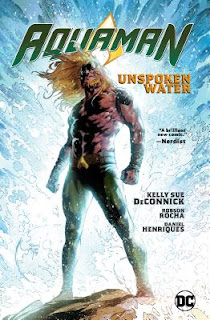 I used to buy the Aquaman comic. I'm not going to lie, I was buying it mainly for Mera, because she's awesome.  But I got bored with where the story was going (especially after the long and drawn out stuff when Arthur was crowned king and later presumed dead when King Rath takes over).  That was followed by the story arc of Unspoken Water, which was the last arc I bought.  But then I found it and the next arc, Amnesty, at the library, so took them both out to see what had happened since I'd given up on the comic.  (I also took Unspoken Water out because I couldn't remember if I'd read the entire thing - it turned out I had).

Unspoken Water starts with Aquaman on a mysterious island with no memory of who he is and how he got there (other than I guess presuming he was on a boat that was wrecked at sea).  He's also terrified of the ocean.  He and the odd inhabitants of the island help each other out, but the ocean seems to have turned its back on them, sending them only dead fish, slowly starving them.  And so in desperation, the inhabitants ask Andy, their name for Aquaman, for help.  They are forgotten gods and goddesses of the ocean, and had banished one of their number, who they believed to be killing the waters around them.  They ask Andy to bring the banished one's daughter with him, hoping to appease the banished one with a reunion. 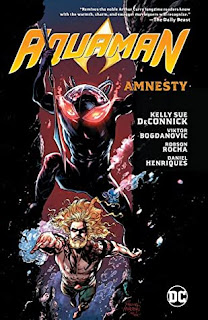 I remember this story line to be confusing; it was a bit easier to read the second time around.  But it's honestly pretty weird (and only has a little bit of Mera in it, so sad).  But I'm glad I reread it, as Amnesty takes place pretty much right where Unspoken Water ends, with the gods and goddesses fulfilling their promise and helping Andy get his memories back.

This was pretty weird too.  But basically, Aquaman died and this ocean spirit sent him back to help the gods and goddesses.  The spirit freely offers Aquaman some of his memories, but cautions him not to look for others as he may not like what he finds.  Of course he wants to know more, specifically about Mera, and he finds out she was the one who killed him...

...Now, it's been a little bit since I read the comics....but I thought Arthur Curry was presumed dead after Drowned Earth?  Maybe I'm remembering it wrong?  I don't know.

While this took some odd turns, it was enjoyable enough to read.  After regaining his memories, Arthur brings his new god and goddess friends back with him to Amnesty Bay. Queen Mera gets pressured to marry, so she chooses the most unlikely candidate, and uses her wedding plans to achieve her aims of rebuilding the Ninth Tride. There was also some craziness at the end with a sort of almost Lovecraftian-sea monster.  So while crazy, it was interesting enough that I'm willing to read the next graphic novel when I eventually get my hands on it.