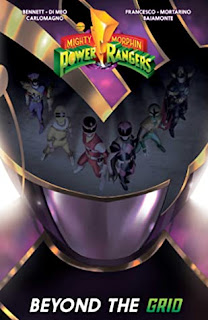 I bought Mighty Morphin Power Rangers: Beyond the Grid along with Shattered Grid.  I didn't know anything at all about this story (except that people who bought Shattered Grid often bought this as well).

Beyond the Grid tells the story of various Rangers (both with and without their Morphin powers) getting pulled into another universe while aboard the Promethea ship. This universe has no access to the Morphin Grid, and so shouldn't exist.  At first they believe the dying universe is empty of life. But then they intercept a distress call.  Sending the last of those who can still Morph to investigate, the Rangers walk into a trap set by a mysterious Purple Ranger living in the Universe, who steals the power from them and their ship.  Who is this mysterious Ranger and how will our Rangers survive (and get home)?

Beyond the Grid is a tough read, particularly in the beginning.  The way the story is laid out, I had a really hard time figuring out what exactly was happening, particularly in the first few chapters (eventually I got the hang of reading it and was able to follow along a bit better).   By the end though, I found myself enjoying the story and quite invested in what was happening; everything came together really well (and pretty much everything that happened eventually made sense, which was another plus). I did have a hard time connecting with the characters though because there were so many of them (and it doesn't help that I didn't follow Power Rangers beyond the initial series on TV years ago, so I couldn't call on prior knowledge of most of the characters to help me here).

All in all, this is a very different story that followed Shattered Grid.  I didn't like it as much, but by the end I found that I did enjoy reading it.